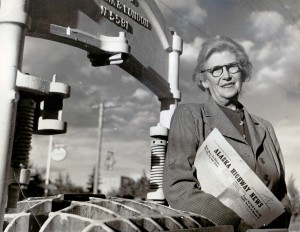 Margaret Lally was born in Windy Ridge, Kansas in 1888. She moved to Vancouver and married George Murray. George and Margaret worked at various newspapers and were actively involved in politics. In 1943, Margaret and George moved to Fort St. John where they started the Alaska Highway News.

Margaret’s straight from the hip editorials, which both delighted and infuriated her readers, were always signed Ye Ed. She used words like “craporini” and “snafoo” as well as improper punctuation. One year she gave readers who insisted on proper grammar and punctuation about two inches of punctuation and told them to do with it as they saw fit!

Margaret became very involved with the community and was an intelligent and out-spoken voice on a variety of topics from politics to farming. In 1971 she received the Order of Canada for her contributions to Canadian journalism and in that same year received an honorary doctorate from Simon Fraser University. She passed away in 1982 in Lillooet. 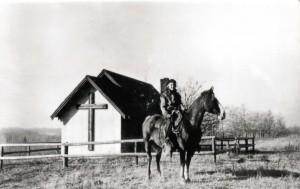 Monica Storrs came to the Peace Region in 1929 to work as an Anglican Missionary and quickly became dubbed ‘God’s Galloping Girl’. She was born in 1888 in London, England, the fourth child of an Anglican priest.

At the age of 41 and self-described as ‘middle-sized and middle-aged and fatally English,’ Monica decided to follow a calling to minister to the people of the Peace Region. She came to Fort St. John in 1928 where she taught Sunday school and established Boy Scouts and Girl Guides in this area.

She was known for her unflagging desire to help people, whatever the circumstances. She provided free board and lodging for children who wanted to attend school in Fort St. John but were unable because of the distance involved. She stayed on as a missionary for over twenty-one years in the Peace Country. 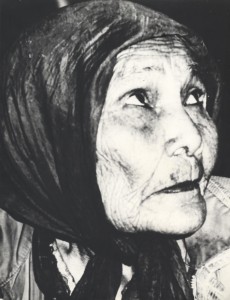 Bella Attachie was born to the Great Chief Attachie, one of the Beaver First Nations (Dane-Zaa) leaders who, in 1900, signed Treaty 8 in Fort St. John, BC.

Bella played a very active role with her people and was visible and regular feature around town. She also went by the names Anachuan and Aanaatswęą. She was a traditional woman and missed travelling on the trails of her youth when she was forced to live on a reserve.

Bella was the last wife of Charlie Yahey, for whose father Charlie Lake is named. They did not have any children of their own but brought up several children including Charlie Dominic, Charlie Yahey’s son by a previous marriage.

Bella became a very esteemed woman amongst her people. Her granddaughter, May Apsassin, recalled the following: “She speak, everybody quiet. And everybody respect her.” At her death in 1976 at the reported age of 118 she was believed to be the oldest living Canadian at the time! 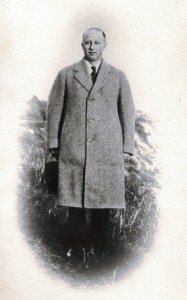 C. M. Finch was born near Aylmer, Ontario. His family came west when he was a boy and settled in Edmonton. In 1913, Finch set off for the north over the Edson Trail with two companions. He homesteaded at the present town site of Fort St. John. He opened a small store in his cabin as more and more homesteaders came into this area.

By the late 1920s, he was running out of room in his cabin so he acquired more land and built a new store (on the northeast corner of what is now 100th Avenue and 100th Street). Finch provided a building for telegraph and land office in the southwest corner and thus pulled a nucleus of a town together. He later donated land for a hospital and the Roman Catholic Church and the community of Fort St. John grew up around him.

C.M. Finch married Daisy (Mary Kelly) Brooks and they expanded the store together. By the late 1930s, Finch was having health troubles. He sold the store to Chris Field in 1943 and died two years later. 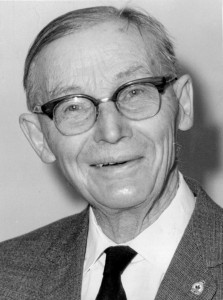 Duncan Cran was born on April 1, 1892 in Paris, Ontario. He later moved with his family to Ashcroft, British Columbia and was educated in Aberdeen, Scotland.  Duncan Cran worked with his brother, Robin, in a Vancouver Island logging business before the First World War.

In 1915, he enlisted in the 88th Battalion and served overseas with the 88th and the 25th Battalions. In 1930, Cran moved to the Peace River region to work as a surveyor and homesteaded near Deep Creek. 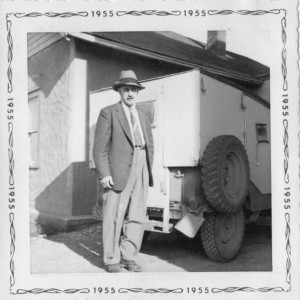 Garnet Kearney was born in Renfrew, Ontario in 1884. He worked on railroads and in mining camps in British Columbia before studying to be a doctor at McGill University. He served in the First World War and returned to British Columbia to practice medicine.

In 1935, Dr. Kearney moved to Fort St. John to become the second doctor in town. He worked with Dr. Brown and then replaced him. Dr. Kearney was generous: he neglected overdue accounts, didn’t charge, or accepted eggs, meat, and produce as payment.

Dr. Kearney owned a modified Model T Ford.Dr. Brown’s daughter recalled “He was always under it or fixing it… Patients who wanted to see the doctor would walk up to him. He would crawl out from under the thing, wipe his hands on his sleeves and have a look.” X-ray film replaced his broken car door window.He had to drag his foot to slow down on the Beatton River Hill!

In 1944, he married Marjorie van Volkingburgh. Dr. Kearney continued his practice until the early 1960s. He passed away in 1971. He was remembered as a man who eased pain, saved lives where possible, and soothed the dying – a “Pioneer Doctor Extraordinary.”